Francis F. Giles, Class of 1900, was the Director of the Kings County Lawyers’ Association. 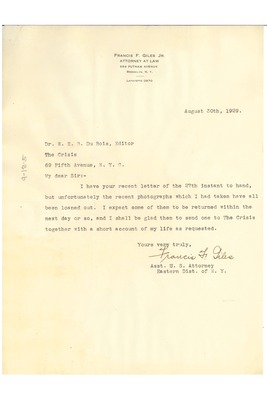 Francis F. Giles, Class of 1900. Director, Kings County Lawyers’ Association. In addition to his LL.B. degree, Francis Fenard Giles received an LL.M. from New York Law School in 1906. An entry in Who's Who of the Colored Race describes Giles as a member of the New York Bar who practiced in Brooklyn and was a Director of the Kings County Lawyers’ Association. The accompanying image is of an August 30, 1929 letter from Francis Giles to W. E. B. Du Bois promising to forward to Du Bois a recent photograph of himself (Giles) and a short account of his life, which Du Bois had recently requested for inclusion in a column to appear in The Crisis, the official magazine of the NAACP Du Bois had founded in 1910. Giles’s signature block, but not his letterhead, shows him to be an Assistant United States Attorney for the Eastern District of New York.