October 10, 1928 Photo Showing Excavation for the Eighth Avenue Subway Line Adjacent to 57 Worth Street and Below Church Street 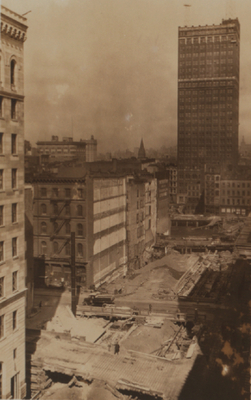 Although New York Law School did not yet own or occupy 57 Worth Street at the time of this photo, the resulting Eighth Avenue subway line continues to rumble along adjacent to the foundations of 57 Worth Street, as all students who graduated after 1962 can attest. As reported in the Fall 2009 issue of the Alumni Magazine (at page 87), what preceded the 57 Worth Street building on that site was the home of Freedom's Journal, the first newspaper in the United States published by and for African Americans. It was located at 236 Church Street, which today is encompassed by the Law School's 57 Worth Street building. Freedom's Journal debuted in 1827, the same year slavery was officially abolished in New York State.