Lloyd Paul Stryker, Class of 1909, was a Manhattan criminal attorney and acted as lead defense attorney during the first Alger Hiss perjury trial. 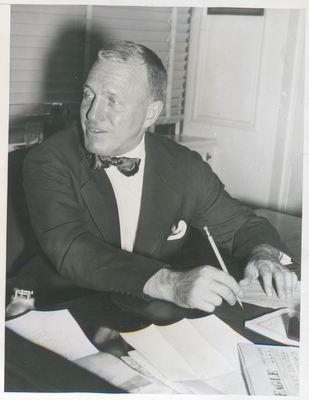 Lloyd Paul Stryker, graduate of New York Law School, was a Manhattan criminal attorney and acted as lead defense attorney during the first Alger Hiss perjury trial. He is also the author of several well-known law books, including The Art of Advocacy. In that book, Stryker commented on winning over a jury saying,

“No point is ever made better than when not directly made at all but is so presented that the jury itself makes it. Men pride themselves on their own discoveries, and so a point which the jury is allowed to think their own ingenuity has discovered can put the advocate in the position where the jury begins to regard him as not their spokesmen, but their colleague.”

Stryker was known as the best criminal attorney in New York when he was hired to defend Hiss in the first perjury trial. A man noted for his histrionic defenses, he lived up to his reputation as he ferociously attacked Whittaker Chambers' testimony in court. His work helped earn a hung jury for Hiss.

Stryker told Hiss he could keep getting him hung juries until the end of time, but Hiss sought vindication. When Hiss thought the trial would be moved to Vermont, he replaced Stryker with the more sedate Claude Cross, a corporate lawyer from Boston who until then had never tried a criminal case.