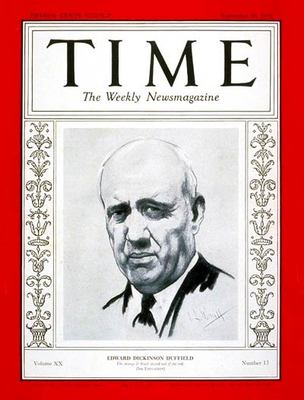 Duffield was born in 1871 in Princeton, New Jersey. Duffield attended the College of New Jersey, graduating in 1892. He received his LL.B from New York Law School in 1894. After law school he returned to his alma mater and in 1895 received a Master's degree.

Duffield served as Assistant Attorney General of New Jersey from 1905 to 1906. He then became the general solicitor for the Prudential Insurance Company, rising to vice president in 1916 and president in 1922. His interest in education is reflected in his appointment as chairman of a committee formed to adjust the relationship between the State of New Jersey and Rutgers University. The work of this committee resulted in the creation of the State Board of Regents, which regulates higher education in New Jersey. From 1920 to 1938 Duffield served as a trustee of Princeton University, and in 1932 he was asked to fill the role of acting president. Retaining his position as president of the Prudential Insurance Company, he stayed in Princeton two days per week, leaving Dean Luther Eisenhart to run the University in his absence. Duffield would also serve as chairman of the Board of Trustees and president of the Class of 1892 before succumbing to the effects of a stroke on September 17, 1938. For all his success, he was never prideful and was quoted in the Princeton Alumni Weekly as referring to himself as the trustee who represented “the great intellectual middle-class.”

Duffield received many tributes in his lifetime, including honorary degrees from Princeton and Rutgers Universities and Lafayette College. In 1932 Time named him Man of the Year. He was a member of numerous clubs involved in professional, religious, civic, and leisure activities. He also served on many University committees. As chairman of the Committee on Undergraduate Life, which he was instrumental in organizing, he worked to ensure that Princeton University remained hospitable to young men of all economic classes from all parts of the country. He believed that the University would fail if young men of ability who were poor in material terms could not enroll and enjoy ample participation in campus activities. In 1939 a scholarship fund was established in his memory, honoring his interest in educating young men of moderate means.