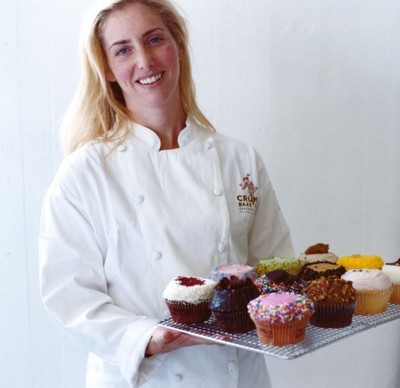 Mia Bauer received her JD from New York Law School in 1996. In 2003 she and her husband founded the Crumbs Bake Shop which became a national chain, and eventually went public in 2012. In July 2014 it filed for bankruptcy.

Crumbs is a bakery chain headquartered in New York City. Founded in 2003 as a small mom-and-pop style bakery on the Upper West Side of Manhattan by Mia & Jason Bauer, the company expanded to 79 locations in eight states (New York, Illinois,Virginia, New Hampshire, Massachusetts, New Jersey, Rhode Island, and California) and Washington, D.C..

Crumbs was the largest cupcake chain in the United States. It produced more than 50 varieties of gourmet cupcakes. Crumbs reopened on October 14, 2014 at its Broadway location in New York. It plans to slowly reopen more stores in the near future.