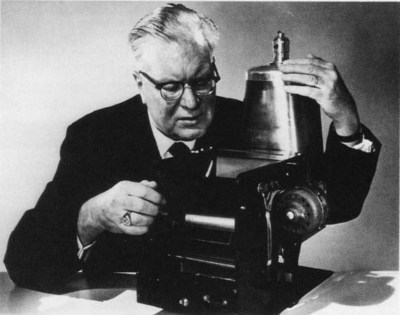 Carlson began to study law at night at New York Law School, receiving his LL.B. degree in 1939. He studied at the New York Public Library, copying longhand from law books there because he could not afford to buy them. The pains induced by this laborious copying hardened his resolve to find a way to build a true copying machine. He began supplementing his law studies with trips to the Public Library's science and technology department. It was there that he was inspired by a brief article, written by Hungarian physicist Pál Selényi in an obscure German scientific journal that showed him a way to obtain his dream machine.

Carlson's early experiments, conducted in his apartment kitchen, were smoky, smelly, and occasionally explosive. In one set of experiments, he was melting pure crystalline sulfur (a photoconductor) onto a plate of zinc by moving it just so over the flame of his kitchen stove. This often resulted in a sulfur fire, filling the building with the smell of rotten eggs. In another experiment, the chemicals he was working with caught fire, and he and his wife were hard-pressed to extinguish the flames.

During this period, he developed arthritis of the spine, like his father. He pressed on with his experiments, however, in addition to his law school studies and his regular job.

Having learned about the value of patents in his early career as a patent clerk and attorney, Carlson patented his developments every step along the way. He filed his first preliminary patent application on October 18, 1937.

The first device recognizable as a modern photocopier was the Xerox 914 which was introduced on September 16, 1959. Even plagued with early problems—of the two demonstration units at the hotel, one caught fire, and one worked fine—the Xerox 914 became massively successful.