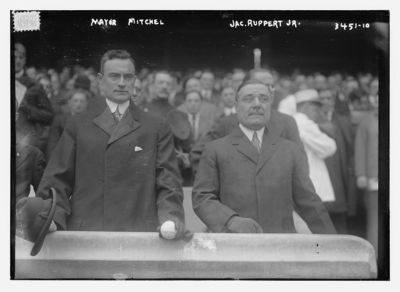 John Purroy Mitchel served as New York City mayor from 1914 to 1917. When he took office at the age of 34, he was known as the “boy mayor.” His Hispanic roots (tracing to his maternal great-grandfather, Jose Joaquin de Purroy, a lawyer from Spain who settled in Venezuela) have led some researchers to dub him the city’s first Hispanic mayor. He is pictured here getting ready to throw out the first pitch on opening day at the Polo Grounds in New York City on April 22, 1915. Standing on the right is Jacob Ruppert, a co-owner of the New York Yankees.