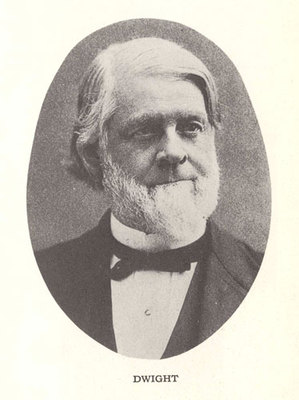 Theodore Dwight founded Columbia Law School in 1858 and served as its first Dean. He was also one of the founders of the Association of the Bar of the City of New York. In early 1891, Columbia's president, Seth Low, sought to change the law school's method of instruction from Dwight's lecture system to the case method developed by Dean Langdell at Harvard. Refusing to alter his approach to teaching, Dwight retired from Columbia, which led to the immediate resignations of all but one of Columbia's law faculty. In protest against Low's changes, many of the Columbia students and alumni formed the Dwight Alumni Association, through which they forged the establishment of New York Law School. The effort entailed a petition for a charter signed by several hundred lawyers, most of them Columbia alumni, which the Board of Regents granted in June 1891. George Chase, one of the resigning Columbia faculty, was appointed as New York Law School's first Dean and two of the school's earliest faculty included Robert Petty and Alfred Reeves, both of whom had resigned from Columbia along with Chase.