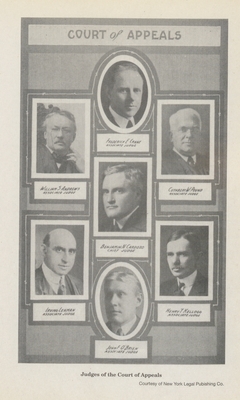 Palsgraf v. Long Island Railroad Co., a decision by the New York State Court of Appeals that helped establish the concept of proximate cause in American tort law. It defines a limitation of negligence with respect to scope of liability. NYLS alumni were involved in all aspects of this trial, lawyers on both sides, judges and an expert witness.

William F. Hagarty, class of 1898, Justice NY Supreme Court, Appellate Division, Second Department (appointed 1927; had been elected to Supreme Court Kings County in 1922) was one of the judges who heard the appeal from the trial court decision in Palsgraf.

Matthew Wills Wood, class of 1903, was the Attorney for Helen Palsgraf. He graduated from Wharton School in 1897 with a B.S. Then enrolled at NYLS where he served as president of the senior class and graduated with honors and awards.

Joseph F. Keany, class of 1895, rose to become head attorney for LIRR in 1904 and was named general solicitor in 1916, and selected McNamara to try the Palsgraf case.

William McNamara, class of 1923, was an evening student at NYLS, where he received second prize honors at graduation. He worked at the LIRR while in school. Being selected by Keany to try the Palsgraf case, he argued it in the Appellate Division and the Court of Appeals.

Dr. Graeme M. Hammond (M.D.), class of 1897, one of the most preeminent neurologists in his field, served as expert witness for the plaintiff in Palsgraf after being retained by Matthew Wood.