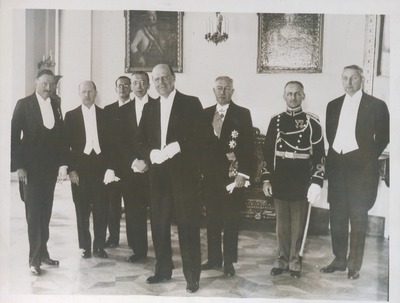 After his admission to the bar, Grenville Temple Emmet began the practice of law at the Emmet Firm, which had been founded in 1805 by his great-grandfather, Thomas Addis Emmet. By 1911, the firm's name had changed to Emmet & Parish and in 1920 it merged with the firm of Marvin, Hooker & Roosevelt, which included Henry S. Hooker, New York Law School class of 1904, and Franklin Delano Roosevelt. The new firm was known as Emmet, Marvin & Roosevelt, and one of the associates working with Roosevelt was Joseph K. Savage, New York Law School class of 1908. After Roosevelt left the firm in September 1924, the name changed to Emmet, Marvin & Martin. The firm continues to practice under that name today. This September 25, 1937 image shows Grenville Emmet (center) with Austrian officials in Vienna shortly after Emmet presented his credentials as the new United States Ambassador to Austria to President Wilhelm Miklas.